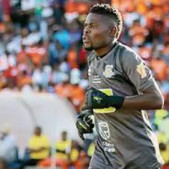 Barely three years after the April 2017 passage of Gofaone Tiro into the hereafter, the Township Rollers squad on the morning of Saturday, November 14 2020 was engulfed by grief once more.

Yet another talent had succumbed to death, goalkeeper Wagarre “Waxy” Dikago.
A sense of sadness and disbelief permeated through the camp.

When Dikago was involved in a car accident on the Saturday afternoon of September 26, the Rollers medical team had got an initial report that the injuries, which needed immediate corrective surgery at Gaborone Private Hospital, were severe, and needed time to heal.

Team manager Motshegetsi Mafa became a daily link with Dikago and the family, as he got medical assistance, and the belief remained that he would gradually mend.

As such, his passing came as a shock.

It marked the end of a life and football career that had much promise.

Born September 24 1994, Dikago was raised in his home village Serowe where he would make the mark in football, first at Green Lovers and then Miscellaneous.

He attracted the interest of Lobatse giants Extension Gunners, where he first worked with Rollers goalkeeper coach Thabo “Mahala” Motang.

Speaking to us from Port Elizabeth where he has been with the under 17 ladies squad at the COSAFA regional tournament, Motang describes Dikago as a hard worker.

“I was privileged to have met and worked with this obidient, hard working, reserved and indirectly short tempered young man,” Motang says.

“I first met him in 2014 while I was at Gunners, by then he was a second choice to Moatlhodi Ndana.

We worked hard to get to the number one position and eventually he was given a senior national team call up to the Zebras,” Motang recalls.

As Motang moved to Gaborone United in the 2015-16 season he parted ways with Dikago, only for them to reunite after Motang returned to the club he had long served as a player and technical team member, Rollers.

“In the 2016-17 season Gunners released Waxy and I had returned to Rollers. Coincidentally Kabelo Dambe also had left for Bloemfontein Celtic in South Africa and we were looking for a replacement,” Motang says.

“I invited him over. We started our relationship once more and he didn’t disappoint, hence at some point he became the first choice in the pack,” he says.

At Rollers, Dikago was part of the team that won the 2018 league and Mascom Top 8 double, and would follow it up with another title in 2019.

When the club reached the 2018 CAF Champions League group stage, Dikago was part of the squad that faced top sides Al Ahly of Egypt, Esperance of Tunisia and KCCA of Uganda, though he started most of the games on the bench.

He would eventually be a first choice goalkeeper for the Blues.

“He always wanted more and hated losing at all cost…he had the most clean sheets in the team because of his good positioning and reading of the game. May his soul rest in peace,” a touched Motang says.
Dikago last featured for Rollers in the 1-0 triumph over Sua Flamingoes at Sowa Town in March 14 2020, before the Covid-19 pandemic brought Botswana football activities to a halt.

Little did we know he had played his last, just when his career was on the rise. Having recently turned 26, so much had been anticipated, only for fate to take a cruel turn.

But, having made his mark on the field and off it as a good human being, his memory shall linger on amongst the Popa family.

Copyright 2020 The Official Township Rollers FC Website. Permission to use quotations from this article is granted subject to appropriate credit being given to www.rollersfc.com as the source