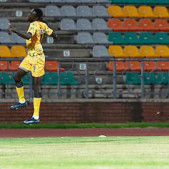 A late Simisani Mathumo header just under ten minutes to the end handed Township Rollers a 2-1 victory over BDF XI at the Lobatse Sports Complex on Tuesday night as the Blues made it a maximum nine points from the first three league outings.

Thabo Metlhayotlhe gave BDF the lead on the stroke of half time before Mohamed Diallo equalised for Popa three minutes later to take the contest to the break at one apiece, before the two sides emerged from half time looking for the winner.

It would be Mathumo nodding home for the Blues in the 81st minute to hand Popa the triumph.

Hasan Oktay made five changes to the team that defeated Jwaneng Galaxy 1-0 at the National Stadium on Saturday.

Rollers had the better of the early exchanges but had to be patient in trying to push forward into the attacking third. Jackson Lesole came close to rounding off a fluid Rollers move with a shot parried away for a corner kick by BDF goalkeeper Kagiso Matlou.

BDF became more enterprising from around the half hour mark, with Godfrey Tauyatswala and Thabo Metlhayotlhe in particular looking lively for Matebele.

Tauyatswala saw a 24th minute effort go over the bar after taking advantage of a momentary lapse in the Rollers rearguard.

Rollers were awarded a penalty in the 36th minute; Matlou saved Tlhalefo Molebatsi’s spotkick, while Motsholetsi Sikele struck the post with his attempt from the rebound.

Metlhayotlhe then opened the scoring for BDF in the 45th minute, before Diallo opened his Rollers account to take the game to half time at one all.

Rollers became more attack minded, but even while moving the ball forward with greater energy, still found BDF well organised at the back and dangerous on the transition.

Metlhayotlhe once more troubled the Rollers goal but Kabelo Dambe was alert to the danger.

In the 81st minute, Mathumo rose to connect to a cross deep into the box to head in the Blues winner.

Copyright 2021 The Official Township Rollers FC Website. Permission to use quotations from this article is granted subject to appropriate credit being given to www.rollersfc.com as the source