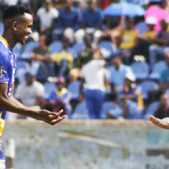 Goals from Mosha Gaolaolwe, Edwin Moalosi and Segolame Boy saw Township Rollers take a 3-0 advantage against Sudanese giants Al-Merrikh in a CAF Champions League preliminary round first leg on a great afternoon for the Blues at the National Stadium.

Against one of Africa’s top seeded sides, Popa were brilliant on the day, displaying tactical maturity to stick to their task of denying their opponents goal scoring chances, while creating attempts at the other end.

Gaolaolwe and Moalosi gave the Blues a deserved lead at the break with second half substitute Boy adding a third in the second stanza.

The two sides meet again in the second leg in Sudan next week, with Rollers taking the three goal advantage to East Africa.

Rollers made two changes to the line up from their previous match; a 1-1 draw with Jwaneng Galaxy in a Mascom Top 8 semi final second leg at the same venue 8 days before.

Joel Mogorosi made a welcome return to the line up, as did Ivan Ntege, while Ofentse Nato was unavailable. Segolame Boy, who had to pass a late fitness test, dropped to the bench. 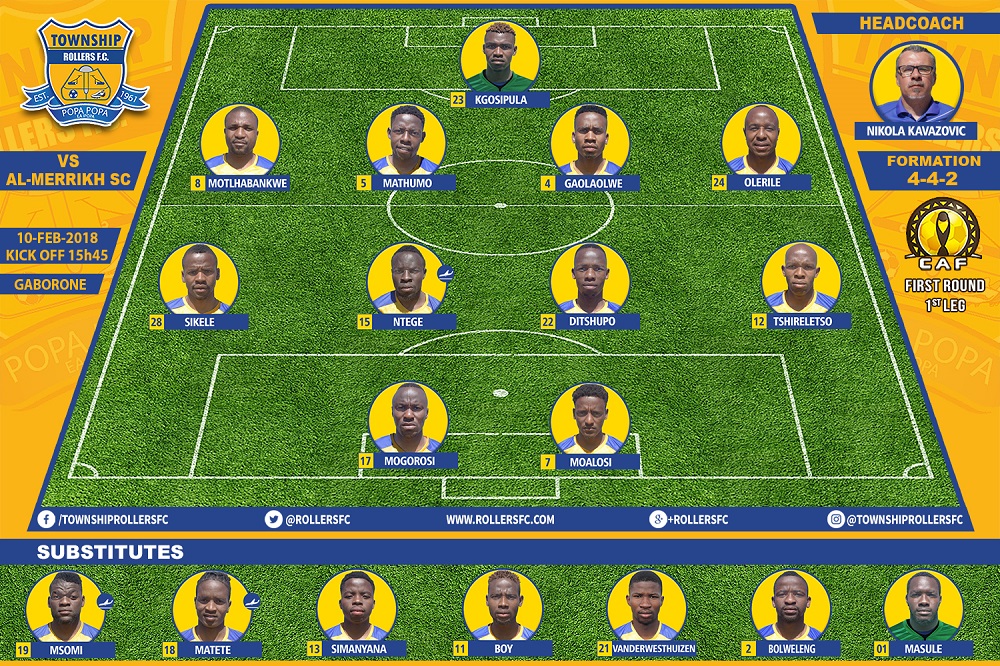 On a hot Gaborone Saturday afternoon, the match started at a slow tempo, Rollers patiently passing the ball, building from the the back.

In the fourth minute, the ball fell to an overlapping Gaolaolwe in the opposition penalty area, but his attempt on goal went high and wide.

The first 15 minutes had no other clear cut chances, the two sides cancelling each other in the middle of the park.

In the 18th minute, Al-Merrikh goalkeeper Esam Shamila was forced into an acrobatic save, cutting out a good Motlhabankwe cross with Tshireletso lurking dangerously in the box.

Rollers would get the lead after a well worked set piece just before the half hour mark. Moalosi played a free kick from a few metres to the wide right of the centre circle, the ball floated into the box where Gaolaolwe headed in to make it 1-0 to the Blues in the 27th minute.

From a long ranger free kick in the 34th minute, Al-Merrikh forward Ahmed Ahmed forced a diving save from Kgosipula who parried the ball away for a corner kick.

In the 41st minute, Rollers went on the attack but Sikele overplayed his attempted cross to Tshireletso.

Popa got the second on the stroke of half time after a well worked move initiated by Ditshupo in the middle of the park, playing the ball wide to Tshireletso, who played in Moalosi, who contolled brilliantly before striking from the edge of the box to make it 2-0 to Rollers in the 44th minute.

A minute later Shamila had to save at the feet of Moalosi as Popa sought a third before the break.

The match went to the half time recess with Rollers two goals to the good.

The second half continued at a slow tempo, tactical discipline crucial on the day. Ntege was brilliant in the middle of the park, winning the midfield battle alongside Ditshupo.

Rollers had a great chance in the 57th minute, Moalosi released Mogorosi into the box, and despite the Popa forward being disturbed by the advancing Shamila, Mogorosi still managed to play the ball towards an empty net only for Al-Merrikh captain Ahmed Adallah Adam to clear the ball off the line for a corner kick.

In the 67th minute, Tshireletso was not alert enough to profit from Shamila dropping the ball while cutting a Popa cross; Tshireletso played the ball back into Shamila’s hands

Segolame Boy then came on for Sikele in the 68th minute immediately made impact with a third goal for the Blues.

With his first touch, Boy toyed the Al-Merrikh back line with his silky skills, before releasing Moalosi, who hesitated to enter the box. Boy then took the initiative, advancing into the box and releasing a low shot past Shamila to make it 3-0 to Rollers.

It could have been four minutes later, a perfectly weighted Moalosi ball played into the box found Tshireletso, who controlled under pressure from Adam before releasing a weak shot saved by Shamila.

Tshepo ‘Skhwama’ Matete came on for Tshireletso who had worked hard on the day but lacked the luck in front of goal.

Mthokozisi Msomi came on for Mogorosi, the final substitution for Rollers.

Moalosi had a good opportunity in the box in injury time but took too many touches before playing the ball across the goal.

Adam had to clear the ball off of the feet of Msomi who had been played in by Boy.

Rollers captain Maano Ditshupo told rollersfc.com after the match that the team had stuck to their game plan and are pleased with the result.

“We were playing against one of the top teams in Africa, and although the job is not complete, we have placed ourselves in a very good position. We wanted to get the goals at home and prevent them from getting the away goal and we did just that. But we know that this is not the first time that Al-Merrikh has conceded goals away from home, and we know they normally play an attacking game at home, so we know that this is not over. But we are very happy to have got the three goal lead,” Ditshupo said.

Moluba, who scored the second goal, provided the assist for the first goal scored by Mosha Gaolaolwe and made way for Segolame Boy to score the third, told rollersfc.com that the Rollers camp worked hard for the win today.

“It was collective effort, it was all about team work, we were playing one of the top ranked teams in Africa and we had nothing to lose- they were the favorites. We worked on attacking them, although we wanted to stop them at the back we didn’t just want to sit and play a defensive game, we wanted to go forward and get goals; a 1-0 result would have been okay but we wanted to score more, so we took the game to them and it worked. We could have scored more but 3-0 is a good result. I was happy with my goal, there are times when I have not been composed in front of goal and that is an area of my game I have been working on. I controlled the ball, looked up then had a shot at goal; I didn’t allow what was around me- the opponents- to distract me,” Moalosi said.

Our head coach Nikola Kavazovic told rollersfc.com in a post match interview that today’s performance underlined the club’s ambition of becoming a top African side.

“Township Rollers is not just a football club anymore; it is a project; myself, the club president and the players are working on a long term plan of turning this into a football giant that competes in the continent. Unfortunately, in Botswana football sometimes people only think of the three points of a match, and may not be patient and panic. We may not win the league, the Mascom Top 8 or make to the group stage of the Champions League; but we are on the way to becoming one of the giants of football, if not in Africa at least in Southern Africa. Today we showed that; we did not just beat the team ranked fifth in Africa, we outplayed them, we showed quality in the level of play, the tactical discipline, the defensive play, the transition, the ball possession and the attack,” Kavazovic said.

Copyright 2018 The Official Township Rollers FC Website. Permission to use quotations from this article is granted subject to appropriate credit being given to www.rollersfc.com as the source