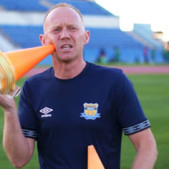 In what is anticipated to be a scintillating display of football, Popa and the Ostriches will bring their constellation of stars to contest a new trophy launched this season plus P1.4 million prize money.

Rollers travelled to Francistown on Friday morning and after lunch and afternoon rest, the Blues had an early evening workout at the match venue.

Popa head coach Frank Nuttall told Rollers media after the training session that he is happy with his side’s preparation and sense of focus ahead of the final.

He said the players were “up for it” and, while giving due credit to Orapa as a quality side with many positive attributes in their play, the Scotsman said his team would give everything in their armour for victory.

Nuttall said Rollers would need the backing of the supporters to drive their side to victory, and urged the fans to transmit positive energy to the team on the field throughout.

The Blues will welcome back Simisani Mathumo and Ofentse Nato from unjury, while Mothusi Cooper will return from suspension.

Rollers have previously played in five Mascom Top 8 finals; winning the inaugural edition in 2012 against ECCO City Greens and the 2018 final against Orapa.

As such, Rollers and Orapa are meeting for the third time in the final of the competition; Orapa won 3-1 in extra time in 2016 while Rollers emerged 4-2 winners in 2018.

Appearing for the sixth time in a Mascom final, Rollers are seeking a record third triumph, while Orapa want a second bite at the cherry in order to join other two time winners Rollers, Gaborone United and Jwaneng Galaxy.

Copyright 2020 The Official Township Rollers FC Website. Permission to use quotations from this article is granted subject to appropriate credit being given to www.rollersfc.com as the source