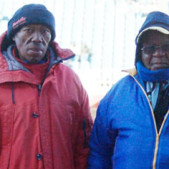 Township Rollers’ former Lesotho-born players, Mafole Sematlane (second from left in the picture) and Pitso Mosothoane (pictured right) were at the Setsoto Stadium in Maseru to watch the Blues in action against Lesotho Premier League sides Bantu and Lioli.
The duo arrived in Botswana in the 1970s as students at the then Gaborone campus of the University of Botswana, Lesotho and Swaziland (UBLS).
They were recruited to a Rollers 1970s side that featured the likes of Newman Motsepe, Clement “Captan Muller” Muthelesi, Freddie Modise, Morwalela “Pro” Seema, Topido Masheleng and Sola “Ace” Mokgadi among others.
Mosothoane, Rollers defender in 1972-76, also played for Linare in the Lesotho top flight and later became the vice president of the Lesotho Football Association (LFA).
Sematlane, Rollers goalkeeper 1974-75, founded Rovers FC in Lesotho and later served as the LFA Technical Director.
The duo is pictured here with former Rollers official, club elder Ernest Kgaboesele (second from right) and, on behalf of the current Popa executive committee, Media Officer, Pako Lebanna (left).

Copyright 2022 The Official Township Rollers FC Website. Permission to use quotations from this article is granted subject to appropriate credit being given to www.rollersfc.com as the source