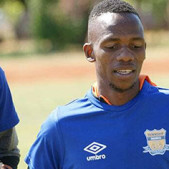 Rollers had more of chances but were denied by a good first half display by GU goalkeeper Goitseone Phoko while in the second half both sides struggled to create goalscoring opportunities.

Jwaneng Galaxy, who recorded back to back wins over Black Forest and Miscellaneous on Saturday and Tuesday respectively, have taken advantage of Rollers dropping points to Sankoyo and GU to reach the summit of the log.

Rollers are now second on 55 points, one behind Galaxy, who now have 56. Rollers have a game in hand- the abandoned match against Miscellaneous whose status is yet to determined by league authorities.

Rollers head coach Rodolfo Zapata made just one change to the team that started the Blues’ 1-1 draw away to Sankoyo Bush Bucks at the weekend.

Segolame Boy recovered from injury returned to the line up while Kamogelo Matsabu dropped to the bench.

It was an open contest from the onset, the two sides playing neat carpet football with quick forward movement in search of goal.

A tenth minute Rollers attacking move located Segolame Boy in the box whose attempt produced a save from GU goalkeeper Goitseone Phoko.

In the 18th minute, Phoko was on hand to save a Lemponye Tshireletso shot and minutes later, Tshireletso delayed shooting on a one one with Phoko who recovered to deny the Blues forward.

Rollers kept on pressing forward. A free kick floated in by Boy was headed into the net by Joel Mogorosi but ruled out for offside.

After an interchange with Motsholetsi Sikele in the 18 yard box, Tumisang Orebonye shot at goal in the 42nd minute, but Phoko was once more equal to the task.

The match went on to the half time recess goalless.

Early in the second half, the two sides continued circulating the ball well in the middle of the park but cancelling each other out in the attacking third.

Bindu Wansididi Bibo came on for Tumisang Orebonye in the 64th minute, while Kamogelo Matsabu was introduced in the 73rd for Joel Mogorosi.

In the 85th minute, Bibo had his shot from the edge of the box hit the upright.

It ended goalless, two more points disappointingly dropped by Rollers. Up next for Popa is the Orange FA Cup Last 16 match against Extension Gunners on Saturday at the same venue.

Copyright 2019 The Official Township Rollers FC Website. Permission to use quotations from this article is granted subject to appropriate credit being given to www.rollersfc.com as the source

Leave a Reply to godisaman