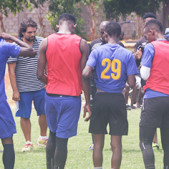 Possibly the two most supported clubs in the domestic football scene, Township Rollers and Extension Gunners will on Saturday afternoon clash in an Orange FA Cup Last 16 match that should produce fireworks.

The Blues and Mapantsula meet at the Lobatse Sports Complex in what will be the most anticipated game of the current round, and Popa head coach Rodolfo Zapata knows to expect a tough contest.

“Each week every team wants to beat us, and plays their best game of the season. Gunners is not an exception,” Zapata told rollersfc.com on Friday, adding that he is confident his side is up to the task. “Before FIFA break, Rollers scored 20 goals in five games. Last two games we wasted opportunities to score, and we dropped four points but I’m working on this point.”

Zapata believes his team needs to put in extra effort in order to achieve the aims of the club to achieve a league and cup double.

“Now is when our players need to be most brave and must find their destiny to be champions. They need to believe in each other. Every player must sacrifice extra bit of effort so your entire squad collectively cannot be beaten,” said Zapata.

The Argentine gaffer insists that, despite the disappointment of the points dropped in the past two league games drawn against Sankoyo Bush Bucks and Gaborone United, his team is still well on track, but he understands the frustration of some supporters.

“In the league we have a game in hand with five matches left to play. Since I started coaching Rollers we have gone nine games undefeated in the league. I understand supporters. All the stadiums are always full, and fans are generous with the team. They want to win, and we want to win as well but sometimes what you imagine before a game starts doesn’t happen. I’m always positive because Rollers has experienced players to manage this situation.”

Copyright 2019 The Official Township Rollers FC Website. Permission to use quotations from this article is granted subject to appropriate credit being given to www.rollersfc.com as the source