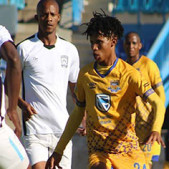 Rollers dominated the first half but wasted many chances, only to develop a 3-0 lead within the first 22 minutes of the second half through a Motsholetsi Sikele goal and two own goals from Gunners’ Thabo Mosielele.

Just when Popa looked to be cruising to comfortable victory, Gunners fought back with two late goals and missed an injury time penalty.

But Tomas Trucha’s men will take the three points as another league campaign comences.

Trucha made three changes to the line up that started last week Saturday’s CAF Champions League.

In the fourth minute, Segolame Boy set up Kamogelo Matsabu in the Gunners danger zone, but Matsabu shot over the bar from close range

Motsholetsi Sikele also shot wide in the box, before Tumisang “Teenage” Orebonye headed wide off of a Moyana set piece.

Two minutes later, Gunners goalkeeper Neo Kenalemang displayed heroics first to save a Segolame Boy shot then use his feet to block a Sikele attempt off the line.

The match was without a goal at the beak, and Rollers introduced Kago Monyake for Segolame Boy in the second hslf.

Popa got a deserved lead six minutes into the second half, Motsholetsi Sikele striking from close range to open the Blues account.

Later, after a Kago Monyake attempt, Gunners’ Thabo Mosielele conceded an own goal in the 63rd minute.

Then as Simisani Mathumo tried to head in Rollers’ third in the 67th, Mosielele tried to defend but his header went in; so Mosielele was credited with a second own goal.

Rollers kept pushing for more goals, but conceded a late goal to Obonye Moswate, who struck one for Gunners in the 79th minute.

With five minutes left Sikele disposed a Gunners defender but spurned a great chance to make it 4-1, losing control and shooting wide.

A minute into injury time, referee Tshepo Gobagoba gave Gunners what looked like a soft penalty; Dirang Moloi going down too easily under the impact of a tackle in the box.

Tshepo Borake missed the spotkick, but a couple of minutes later he hit a stunning long range half volley shot that made it 3-2.

Despite the late scare, the victory should prove a positive start to Rollers’ league campaign.

Leave a Reply to godisaman